For more than two decades, Mimi Grosser has been an invaluable player in the CDSC lineup and a role model for at least two generations of CDSC volunteer mediators, interns and Board members.

The Mimi Grosser Scholarship Fund was created to honor Grosser and to spotlight the extraordinary service of CDSC’s cadre of volunteer mediators. The Mimi Fund, as it is known, provides scholarship support for deserving participants in CDSC training and professional development programs.

CDSC is a 501(c)(3) nonprofit organization established in 1979. To learn more about mediation and training opportunities, or to make a gift to the Mimi Grosser Scholarship Fund please click here. 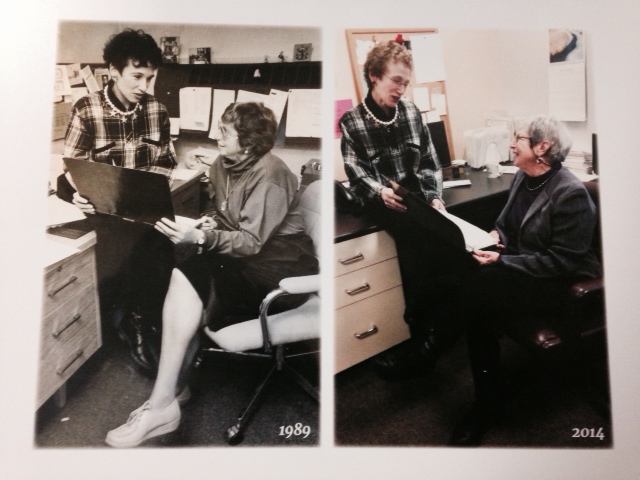 Working with Groups in Conflict:
Facilitation Skills for Mediators

This one-day workshop will help you apply and extend your mediation skills to the facilitation of multi-party conflicts.


Conducted by: A topnotch facilitator from the Public Conversations Project (PCP).

About the Public Conversations Project: PCP has facilitated conversations on the most contentious issues of our time for the past twenty-five years. Their Reflective Structured Dialogue model has become a standard for facilitation when deep conflicts are rooted in values, beliefs or identity. In this experiential workshop, you will benefit from some of the lessons learned about creating an effective process based on the needs of the participants in contentious, multi-party contexts.

The Community Dispute Settlement Center, Inc. (CDSC) is pleased to sponsor this workshop in collaboration with the Public Conversation Project who has customized the curriculum for mediators.

(*)If you are interested in this topic and have not been trained as a mediator, CDSC offers 33-hour Mediation Training twice each year, Spring and Fall. Next session begins March 19, 2015. For more information:  visit our website www.communitydispute.org

With questions, please contact CDSC directly  at This email address is being protected from spambots. You need JavaScript enabled to view it. or
tel. 617-876-5376.

The CDSC Bash was a huge success! See pictures from the Bash here! 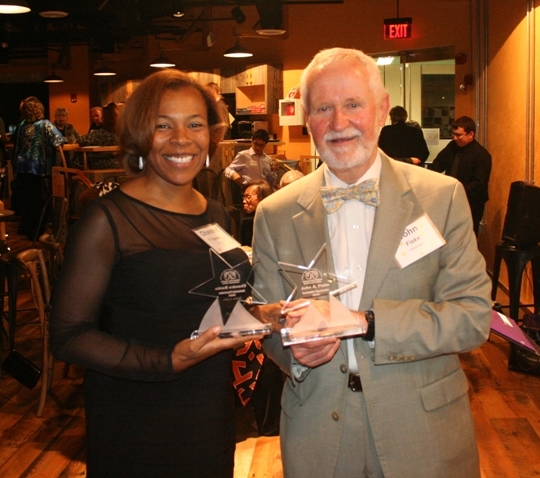 This year's annual celebration will be held on on Wednesday, October 15, 2014 at the Venture Cafe in the Cambridge Innovation Center starting at 6:30pm.

The CDSC Bash proves to be a delighful-- and meaningful --way to celebrate the accomplishments of the mediation community. This event continues to serve as our signature fundraising event of the year; the funds we raise support the alternative and affordable dispute resolution services we provide in the courts, the schools and the community.

We hope you will join us at our 2014 Bash and consider supporting this event with a generous gift. 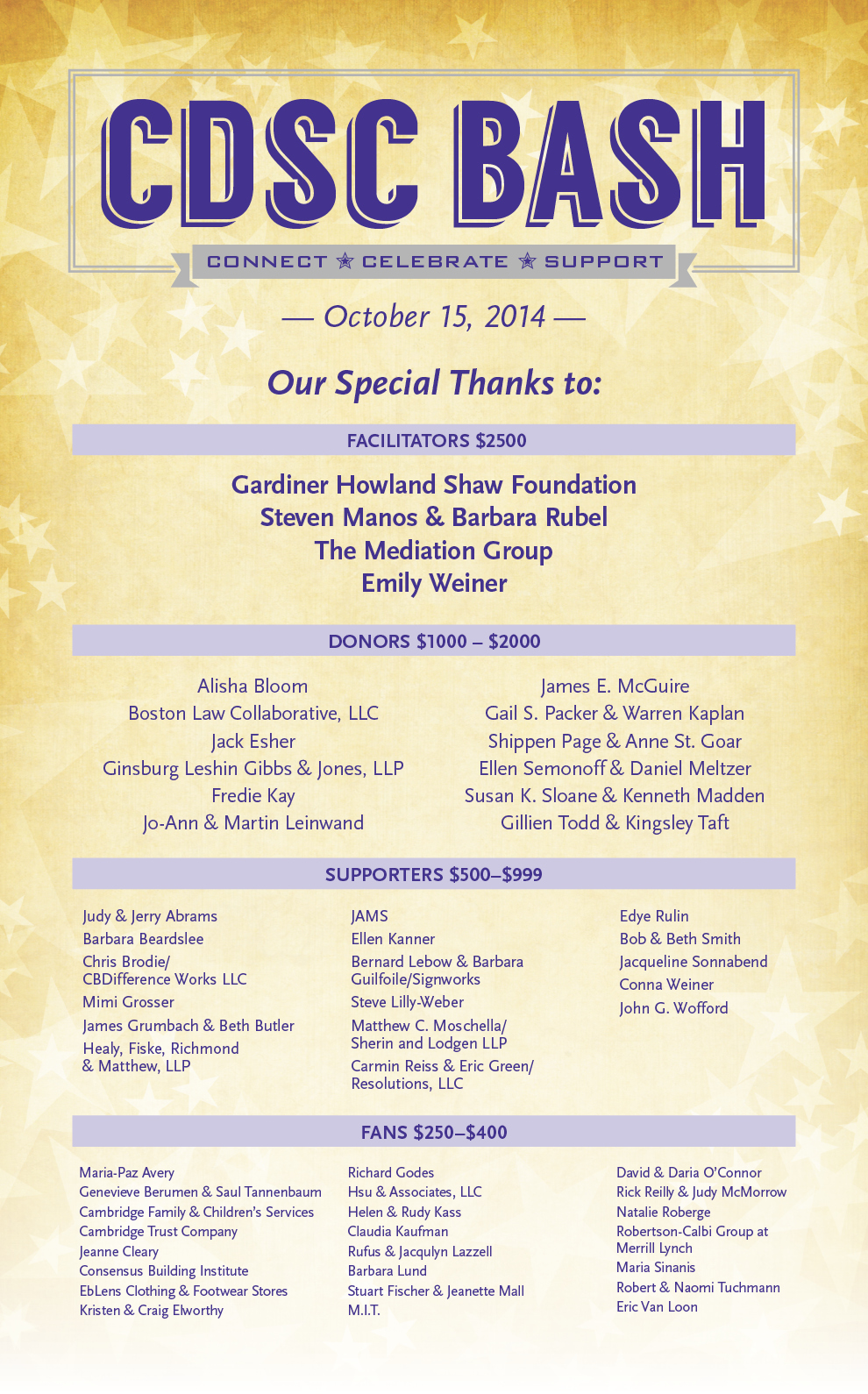 VOLUNTEERS FOR 20 YEARS HONORED AT CDSC

Roberta Kosberg, Ph.D., is a professor of Communication at Curry College and author of several studies that examine the power of language and the relationship of gender, power and the word. Dr. Kosberg has been a volunteer mediator at CDSC for nearly 20 years and has conducted more than 200 mediation sessions.

Jo-Ann Leinwand, a former president of the Greater Boston Women’s Council of Realtors, is an Accredited Buyer’s Realtor, a Certified Luxury Home Marketing Specialist and a Certified Home Staging Professional at Keller Williams Realty. Leinwand has been a member of the CDSC court-based mediation team since 2001 with more than 100 court—mediated cases to her credit.

Ellen Kanner has led development efforts at many non-profit organizations in Boston and in the Berkshires, where she was a resident until 2002. She trained as a mediator with CDSC in 2010 and has served as its pro bono development consultant since that time.

The award, created to honor Mimi Grosser, a long-time Cambridge resident and volunteer at CDSC for over 25 years, highlights the crucial role volunteers play at CDSC. The award is supported by the Mimi Fund which provides scholarship support for deserving participants to CDSC training programs.

CDSC, established in 1979, is a private non-profit mediation and training center, dedicated to providing an alternative and affordable forum for resolving conflict. CDSC provides mediation services through skilled teams of volunteer mediators and conducts training programs in mediation and conflict management. CDSC also collaborates with other organizations to provide trainings to deal with conflict effectively.

For more information about CDSC and the Mimi Fund, please call 617-876-5376, email This email address is being protected from spambots. You need JavaScript enabled to view it. or visit the Center's website at http://www.communitydispute.org.

BOSTON- May X, 2014The Massachusetts Nonprofit Network(MNN) is pleased to announce that two Cambridge nonprofits: Community Dispute Settlement Center, Inc., a mediation-services organization, and Adrienne Klein, Community Outreach Director of Cambridge Community Services, a youth-development organization, have been selected as finalists for the 2014 Nonprofit Excellence Awards. The Excellence Awards will be presented at MNN’s celebration of Nonprofit Awareness Day, a statewide holiday on June 9 that highlights the work of the nonprofit sector and raises awareness of causes throughout Massachusetts.